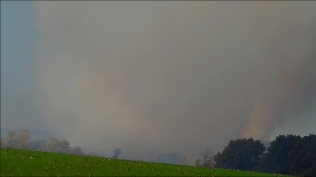 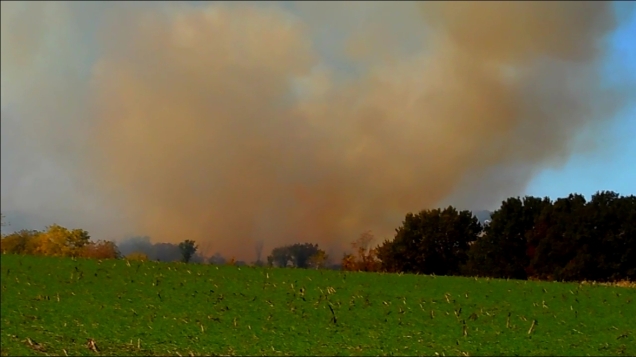 It appeared as a white plume, a large feather-like trail writing a detour across the distant horizon. I was driving on Highway 23 thinking,  another idiot’s burning leaves on a windy day. Tree branches waved as I passed, hoping the distant smudge would soon disappear. On a good day with no Sheriff’s car parked over a hill, driving time from Montello to Princeton is around 15 minutes.

The smoky sky had changed color and seemed to be bouncing off its source and rolling along the blue ridges like yellow tinged puff-balls by the time I slowed and drove into town. Traffic halted in front of me as a fire truck loaded with hose rolled out and parked across the street. A Jeep towing a 4 man ATV mule pulled out and sped south of town. Volunteer fire fighters started arriving, knitting their cars through stalled traffic like grannies on a mitten making challenge. Along with a couple of other drivers I gunned out ahead of the delay in timing. Not usually curious, just once I let this take me where it might and drove out the same highway.

I though I was getting closer when thicker smoke started flowing across the highway. Surely a sign the source was just around the next corner.  Not true. I started to doubt my original thought that I was looking for a leaf burn gone astray. Miles and time passed, smoke still flowed on currents. This was still growing and I hadn’t found it yet. I drove another twenty minutes before finding  the fire location.

Two more fire trucks passed me and turned down a road that appeared to head to a  park.  I decided it wouldn’t be smart to follow them. Further down, an old beaten road appeared and I took it. That lumpy road seemed to be the area of the fire. Several other cars were already there, sightseers like myself, curious, watchers that had been driving by and couldn’t help pulling in. Children were playing in the field a few hundred feet from the blaze as if it was a family picnic.

This strange, whirling, tornado-like, monster of white was churning through a marsh snacking on tidbits from pine trees and leaving stark black toothpicks standing behind it. Over the years, I’ve kept watch on other grass and forest fires from miles away.  Each spring we burn our backyard prairie. I’m familiar with the smell of  burning grasses, pines, oaks, and prairie flowers. Grass fires burn white, forest fires sooty grey with an odor of dirty, wet chimneys.

Standing today in front of the burning marsh looking at a strange tornado-like beast towering toward the opaque sky, I understood both fear and curiosity fire and storm have on us. The group I mingled with knew the brisk wind was blowing directly at us. Ash from the fire was falling down around us. Had it been a bit of pine needle, sedge, cattail, an abandoned birds nest? The field in front of us had already been entirely shown of its corn crop or we’d have been in immediate danger. It was difficult to leave, strikingly attractive and gut-wrenching repulsiveness fighting an ages old battle to change natural elements. I knew it was best to put a distance between us and a still very greedy blaze.

I’ve spent a lot of time near wetlands and marshes yet it seems strange to watch a blazing marsh. It sounds like an oxymoron.  We’ve actually had very long, dry spells this year and we’ve got a lot of tinder dry ground litter. I regret not knowing this area and I have no idea what existed before the flames tore through it. It certainly had to have been a heated battle between a wetland beauty and the flaming beast.  Beauty certainly  lost this round.