I wanted to step back in time a hundred years and visit a couple of wetlands before two families of farmers parted the tall sawgrass like a Saturday haircut and walked behind a couple of oxen bought on the cheap from departing sodbusters, and butchered as stringy beef steak after the first plowing. 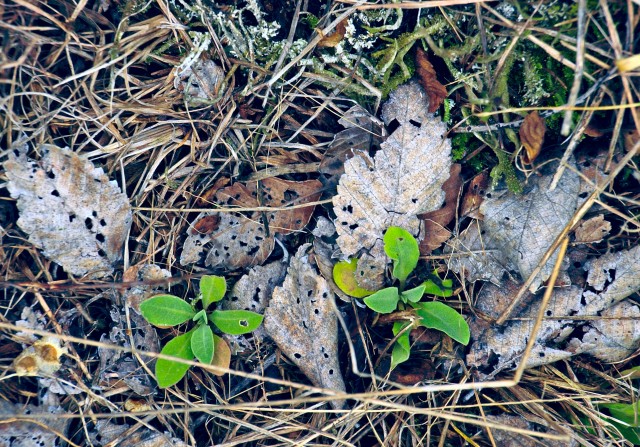 A 1919 Plat Map of Marquette County, Wisconsin shows land allotted to a variety of Summerton kin, Frank, William, Milford and J.L. At least the bog kept the surname of, if not, the original land owning family, most likely the one that contributed the most to the Nature Conservancy. It’s not a difficult location to find, but like many smaller Nature Conservancy sites parking is minimal and not well maintained. Parking was one narrow mowed down slope site with no turnaround. 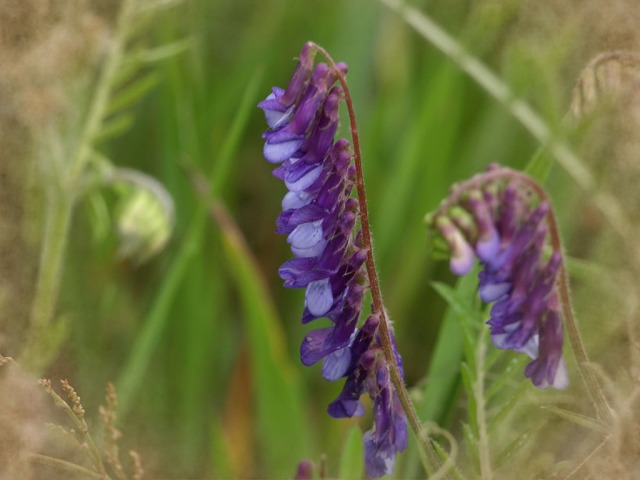 I’d walked the bog before, in winter, when I could clearly see the artesian springs bubbling to the surface where dead sedges and saw grasses draped over on themselves like laundry fallen off the clotheslines. In late spring the tallest grasses were tickled by rivulets, most lush and nutrient fed by the constant flow of water. I was homo-stompus trying not to blunder through sedges dressing me to mid-thigh like an inverse kilt. Carefully placing alternating ugly size eleven black rubber boots, (this was no place for America’s Top Model), only thick corrugated soles lapped the tannic bronze water seeping through last year’s decaying mounds.

In mid-step I flashed back to a misadventure into another bog where my heel wouldn’t sink a couple of inches every few feet and bounce along for another step. Unreasonable fears of encountering a human-eating bog-thrasher flipped my anxiety into overdrive and I hurried back to Summerton’s entrance. My original plan was to photograph the bog’s wildflowers, not to set a new record for trail gaiting through a wetland. As I sped past, colors’ kissed their neighbors with bravado and laughed in the breeze. My eyes were weaving patterns from shades of grasses and textures from highlights and shadows. Amazing tidbits of prairie and bog flowers, ‘Made in the USA’, rich colors and sweet memories were simply Splenda in the grass. And even some of the grasses are invasive!

The original flora I was seeking no longer existed in this place, at this time in late spring. Perhaps only one flower, the Wild Lupine, photographed on this trip was a native plant. The rest were European-American wildflowers, originally planted by settlers in their gardens and now common and sometimes invasive escapees on bogs and prairies. From my conjured step back in time I was able to bring forward several of the native grasses and sedges, woodlands, and the artesian springs. Perhaps at other times during the year a greater range of native perennials will put in an appearance.

Closer to my heart, what if the bog out back of our home was still the small lake local Natives gathered wild rice in fall? Now it’s a silted over sedge bog, with two narrow trickles of water running through it, well on the way to joining encroaching woodlands. Not even a hint of wild rice remains.

An unknown farmer lived on this land before us. Late one day in the 1930’s, having finishing his upper field he started driving his tractor toward his lower work across the bog. That tractor had been fairly new, still a nice hunting shade of bright orange. He steered the ironed wheeled behemoth down the backside of the wee slippery slope one moist day when the monster gulped and the tractor entered the bog never to plow again. The deep, acidic, muck won every attempt to wrestle that tractor free. The tractor would celebrate more than seventy years of mockery in the war over man versus wetlands.

Long into the future, an old codger with a long memory and a hankering to rebuild a piece of his youth showed up with a couple of husky young friends and two strong, late model John Deere tractors. They started early one morning with a backhoe, three men on shovels, and two tractors hitched together. Just about dusk they finally uncorked the old tractor loaded in onto a trailer and hauled it off. It was in amazing shape for having been digested by Moby Bog for over seventy years. Bogs must have a very slow metabolism.

The following spring I went looking for a few worthy photos and noticed a beautiful group of Marsh Marigolds growing in a shallow pool of water where the old tractor had been. Carefully stepping through the still black water that reflected the marigolds and with one wrong step I was stuck above the knee in the bog with my left foot pointed southeast and the corresponding hip rotated north seeking terra firma. Like quicksand, when I tried to pull my foot out it went in deeper. Somehow I managed to save the other foot and the camera.

Eventually my husband noticed I didn’t return to the house and found me out back. After laughing himself silly, he tossed me a stick and I was encouraged to lean my weight on it and pull myself up and out. However, it was, literally, a stick. Being heftier than the catbird chirping in the Red-twig Dogwoods at my back, I crumpled back into the oily morass. My shit-kicker boot was rapidly filling with a thick peaty ooze as my foot slid ever farther toward the next town beyond us or in my mind, rapidly took aim at my chin and my unwelcome meal of mud pie and inevitable extinction.

Hubby, the woodworker, finally sorted through his collection of fine lumber, found a satisfactory slab to bear my weight and gave an accurate heave-ho across the sides of the pit from hell. At last I parked my oh-so-weary ass and cocked my free leg sideways above the clutches of the muck and sobbed. The sinister bog was still chewing away at my foot, trying to pull me into its ancient mire of extinct mammoths, bison herds, lost deer, and the old iron-tired tractor that had been stuck since the early 1930’s.

Devising several inspired contortions not shown in the Kama Sutra I finally managed to remove my leg with the foot intact. I swear the damn bog belched as it swallowed my rubber barn boot and soggy sock. In early September, when the morning mist comes on early, just before the sun rises, I still imagine the old tractor’s lonely farmer cussing up a blue mist over the bog and through the trees that have overgrown his fields. All these years I assumed the bog only got his tractor. 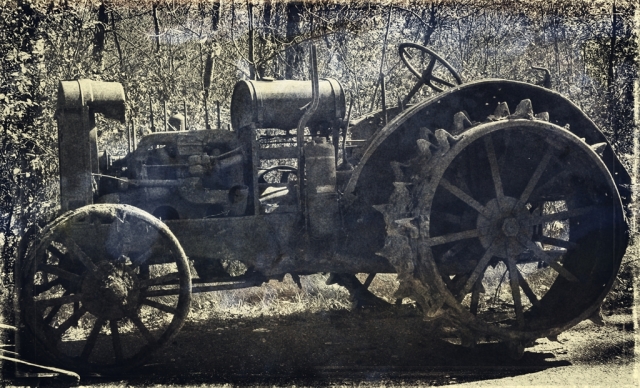